How does an Apostille certificate work? 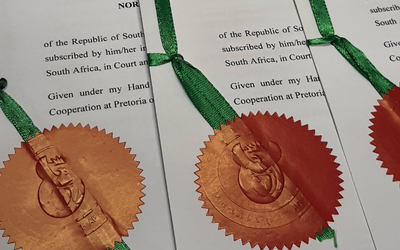 Do you need to use a public document from South Africa in a foreign country? You will need to obtain an Apostille Certificate if the Country of Destination is a signatory/member/contracting state to the Apostille Convention (Hague Convention of 5 October 1961 Abolishing the Requirement of Consular Legalisation for Foreign Public Documents). This procedure is known as "authentication" and is used to verify the origin of the public document. South Africa is a member country or state of the Hague Convention. An Apostille Certificate is required before legal SA documents may be used in a foreign country.

The Apostille Certificate is issued by an authority designated by South Africa, called the "Competent Authority". This certificate facilitates the exchange and verification of public documents between signatory countries of the Hague Convention. The Convention abolishes the legalisation process and replaces it with the single formality of an authentication certificate.

An apostille is an internationally recognised document used to certify the authenticity of a document's signature, seal, or stamp. It is commonly used when documents are transferred from one country to another. The apostille is issued by an authorised government official, such as a notary public, and then authenticated by the issuing country's Ministry of Foreign Affairs (DIRCO) or the High Court.

Once the apostille is issued, it can be used in any other country that is a member of the Hague Convention, a multilateral treaty that establishes the rules and procedures for the authentication of documents. An apostille is a convenient and efficient way to verify the authenticity of documents that need to be transferred from one country to another. It is a form of international authentication that is accepted by most countries around the world.

By obtaining an apostille, individuals and organizations can ensure that their documents are properly certified and accepted by foreign authorities. The apostille process is straightforward and involves the document's signature, seal, or stamp being verified by an authorized government official, followed by authentication by the issuing country's Ministry of Foreign Affairs.

Once the apostille is issued and attached to your document, it can be used in any other country that is a member of the Hague Convention, a multilateral treaty that establishes the rules and procedures for the authentication of documents. In other words, the apostille is an internationally recognised document that allows documents to be transferred from one country to another easily and confidently.